There is nothing legendary about the life of Nicolas Flamel. According to the records, he was born in 1330 and died in 1418. He was a real person, who became one of the greatest alchemists in the world. The Bibliotheque Nationale in Paris contains works copied in his own hand and original works written by him. All the official documents relating to his life have been found: his marriage contract, his deeds of gift, his will. His history rests solidly on those substantial material proofs for which men clamor if they are to believe in obvious things. To this indisputably authentic history, legend has added a few flowers. But in every spot where the flowers of legend grow, underneath there is the solid earth of truth. -- Reginald Merton

While in exile on the Island of Jersey, between 1853 and 1855, Victor Hugo participated in a series of seances, or 'table turnings', where he claimed to have communicated with several famous spirits. He wrote the conversations down, but some skeptics might claim the conversations were the conscious or unconscious by-product of a very creative mind -- which no one disputes Victor Hugo had. 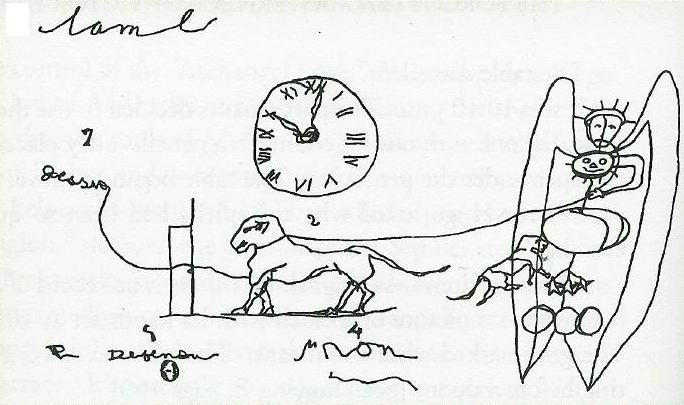 The above image was channeled/drawn by Hugo the night Nicolas Flamel made his appearance on the Island of Jersey. Flamel's 'signature' appears in the upper left. The conversation in part focused on what those beings who lived on the planet of Mercury looked like:

[A Mercurian] " has six torches/suns [globular bodies attached to the creatures]; two eyes which are always open; an enormous head, but very light; a long but very slender body; it doesn't eat solid material, but rather liquid; it doesn't breathe, but shines instead; it has a spouse. -- Conversations with Eternity, translated with commentary by John Chambers, p. 153, © 1998.

Victor Hugo had shown interest in Nicolas Flamel prior to his exile on Jersey. Hugo referenced Flamel several times in Notre Dame de Paris, which was published in 1831, when Hugo was only 29.

"The mud of Paris," thought he drowsily--for he now felt pretty well convinced that he would have to put up with the kennel as a bed--"has a most potent stink. It must contain a large amount of volatile and nitric acids, which is also the opinion of Maitre Nicolas Flamel and of the alchemists."

Thus the Roman Abbey--the Church of the Mystics--Gothic art--Saxon art--the ponderous round pillar reminiscent of Gregory VII, the alchemistic symbolism by which Nicolas Flamel paved the way for Luther--papal unity--schism--Saint-Germain-des-Prés--Saint-Jacques-de-la-Boucherie--all are blended, combined, amalgamated in Notre Dame.

Then he had penetrated farther afield, had dug deeper, underneath all that finit, material, limited knowledge; he had risked his soul, and had seated himself at that mystic table of the Alchemists, the Astrologers, the Hermetics of which Averroës, Guillaume de Paris, and Nicolas Flamel occupy one end in the Middle Ages, and which reaches back in the East, under the rays of the seven-branched candlestick, to Solomon, Pythagoras, and Zoroaster.

It is certainly true that the Archdeacon frequently visited the cemetery of the Holy Innocents, where, to be sure, his mother and father lay buried with the other victims of the plague of 1466; but he seemed much less devoutly interested in the cross on their grave than in the strange figures covering the tombs of Nicolas Flamel and Claude Pernelle close by.

It is certainly true that he had often been seen stealing down the Rue des Lombards and slipping furtively into a little house which formed the corner of the Rue des Ecrivains and the Rue Marivault. This was the house which Nicolas Flamel had built, in which he died about 1417, and which, uninhabited ever since, was beginning to fall into decay, so much had the Hermetics and Alchemists from all the ends of the world worn away its walls by merely engraving their names upon them. Some of the neighbours even declared how, through a hole in the wall, they had seen the Archdeacon digging and turning over the earth in those two cellars, of which the door-jambs had been scrawled over with innumerable verses and hieroglyphics by Nicolas Flamel himself. It was supposed that Flamel had buried here the philosopher’s stone; and for two centuries the Alchemists, from Magistri to Père Pacifique, never ceased to burrow in that ground, till at last the house, so cruelly ransacked and undermined, crumbled into dust under their feet.

Book V, Chapter I: The Abbot of St.-Martin's

"It is you who are in error," returned the Archdeacon with dignity; "Dædalus is the foundation; Orpheus is the wall; Hermes is the edifice--the whole structure. Come whenever it please you," he continued, turning to Tourangeau. "I will show you the particles of gold left in the bottom of Nicolas Flamel's crucible which you can compare with the gold of Guillaume de Paris. I will instruct you in the secret virtues of the Greek word peristera. But before all things, you shall read, one after another, the letters of the marble alphabet, the pages of the granite book. We will go from the doorway of Bishop Guillaume and of Saint-Jean le Rond to the Sainte-Chapelle, then to the house of Nicolas Flamel in the Rue Marivault, to his tomb in the cemetery of the Holy Innocents, to his two hospices in the Rue de Montmorency. You shall read the hieroglyphics with which the four great iron bars in the porch of the Hospice of Saint-Gervais are covered. Together we will spell out the façades of Saint-Côme, of Sainte-Geneviève-des-Ardents, Saint-Martin, Saint-Jacques-de-la-Boucherie--"

Book V, Chapter II: This Will Destroy That

For the thought written in stone there existed at that period a privilege perfectly comparable to the present liberty of the press. It was the liberty of architecture.

And the liberty went far. At times a door, a façade, nay, even an entire church, presents a symbolical meaning wholly unconnected with worship, even inimical to the Church itself. In the thirteenth century, Guillaume of Paris, and in the fifteenth, Nicolas Flamel wrote such seditious pages. Saint-Jacques-de-la-Boucherie was a complete volume of opposition.

"Others have thought," continued the Archdeacon musingly, "that it were better to experiment upon a ray from Sirius. But it is difficult to obtain this ray pure, on account of the simultaneous presence of other stars whose rays mingle with it. Flamel considers it simpler to operate with terrestrial fire. Flamel! there's predestination in the very name! Flamma! yes, fire--that is all. The diamond exists already in the charcoal, gold in fire--But how to extract it?

The churches usually had a cell set apart for these refugees. In I407, Nicolas Flamel had one built in Saint-Jacquesde-la-Boucherie which cost him four livres, six sous, sixteen deniers parisis.